The most common transducer type in headphones is the dynamic driver. It’s basically a miniature version of the large driver you’d see in a typical speaker in the home. There are other headphone driver types, but for this article we’ll focus on the dynamic driver.

The dynamic driver is a transducer that converts an electrical signal into an acoustic signal. The image above shows a partially disassembled headphone capsule with the earpad and driver grill removed. The shiny circular transparent object is the driver diaphragm—it’s like the speaker cone in a regular speaker. The electrical signal to the headphones causes it to move in and out (as show at right) and creates the sound you hear in the headphones.

To understand exactly how wire, electrical signal, and magnets cause the diaphragm to move, we’ll need to start with electromagnetic principles…and I’ll have to break out the Dremel tool and distroy some perfectly good headphones. RIP V-Moda Crossfade LP, you died for a good cause.

Electro-Motive Force
A dynamic driver converts an electrical signal that represents the music into a mechanical movement of the driver diaphragm that compresses and rarifies the air in front of it to create a sound wave representative of the original electrical signal. The basic principle at work rests on the fact that when you put current through a wire it creates a magnetic field around the wire proportional to the amount and direction of the current flow. If you immerse the wire within another magnetic field, the magnetic field around the wire will react with the larger field and force the conductor to move. This is the basic principle behind all electric motors…in fact, the assembly of wires and magnets within a headphone driver is called its motor. 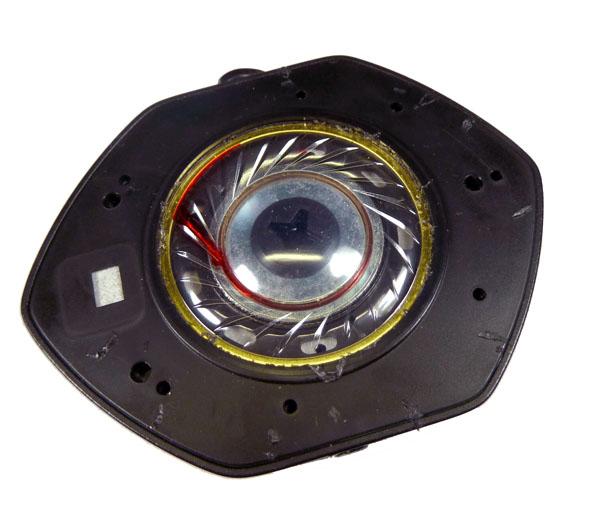 At the bottom of the image above is a crudely drawn illustration of a wire within the field of a permanent magnet. A permanent magnet is a chunk of steel or other material that has been permanently magnetized. The wire is attached to the terminals of a battery and has current flowing though it. The interaction between the magnetic fields of the permanent magnet and conductor will cause the conductor to move. (Caution: If you wire up a system like the one above you’ll blow up the battery. It will work for short period of time, but since it’s effectively shorting out the battery the current will be very high and things will start to go sideways in short order. Wheeee!)

Magnetic flux lines (the lines of magnetic force shown in red in the illustration) have a couple of rules you’ll need to know:

As a result of the magnetic field circling the conductor, the flux lines from the larger magnetic field tend to want to go around the wire in the same direction. This causes more flux lines to go around the right side of the wire than the left. You can think of these flux lines as little rubber bands bent out of shape and wanting to get back to their straight line path of least resistance. So, it’s like all those rubber band flux lines are pushing against the conductor’s magnetic field and forcing it to move left in the illustration. Of course, if you increase or decrease the current flow in the wire, the force and movement of the wire will be more or less, and if you reverse the flow of current in the wire it will move in the reverse direction. Put an audio signal on the wire and it will move back and forth in a way directly related to that electrical audio signal.

Now that we know we can use a magnet to get a wire to move along with the music, all we have to do is figure out how to construct a motor in such a way that we can attach a speaker cone, or in this case a headphone driver diaphragm, to it so we can make some sound.

First, we can take that “C” shaped magnet above and extrude it around in a circle so that the space between the north and south poles becomes a circular gap into which we can put the circular conductor that carries the audio signal—which from now on we’ll call the voice coil. 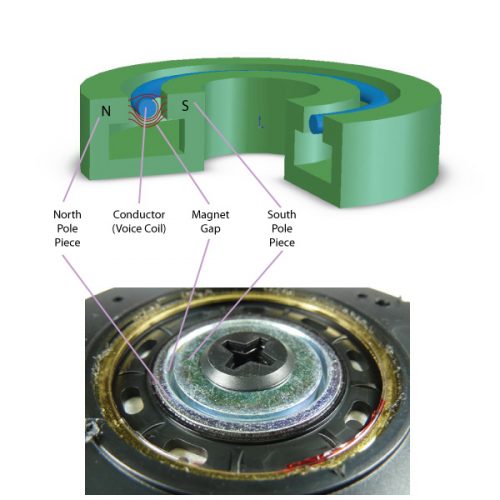 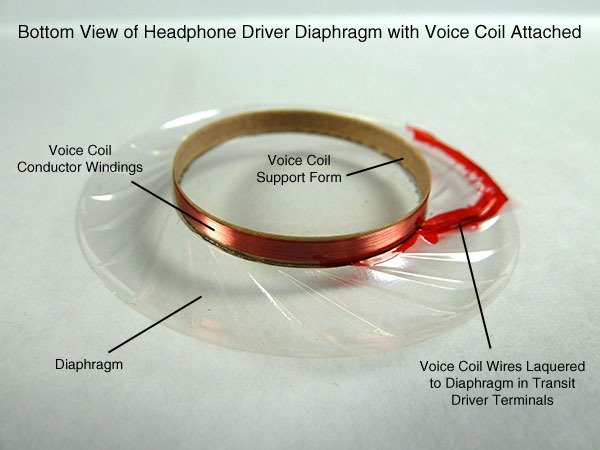 Generally, headphone diaphragms are made of one or more thin sheets of plastic formed into shape by pressure stamping with dies under heat. The central part is called the dome, the outer part is the flexure. The flexure area is fixed to the driver housing at its outer edge, and to the voice coil where the flexure meets the dome. The small creases in the flexure act to allow it to slightly change shape more easily as it moves in and out, and aid in stiffening the flexure to prevent modal break-up. (Non-pistonic vibrational modes when driven at high frequencies.)

There are numerous other materials and geometries used for headphone driver diaphragms, but the basic principle described here remain true for all types of dynamic drivers. With very few exceptions, all dynamic drivers have:

Now let’s take a much closer look at the magnetic circuit of a real headphone driver.

You probably remember pictures from your grade school text book showing you how to magnetize a nail by wrapping a coil of wire around it and attaching the ends to a battery. Well, most all commercial magnets are made in a similar, but much more complicated way. Magnets are made by putting various materials in a linear magnetic field within a large coil of wire. The problem with that “C” shaped in cross-section circular magnet is that you can’t actually magnetize it in such a field—the geometry just doesn’t work out.

This washer-shaped magnet is made by magnetizing a long tube of the appropriate dimensions first, and then slicing it into the final washer thickness. Most magnets in today’s headphones are made from rare-earth ceramic materials—most commonly samarium-cobalt and neodymium-iron-boron—and are very strong.

Okay, so now you know how the voice coil in the magnetic gap moves the diaphragm back and forth to the music, and how sound radiates from the front of the diaphragm as it moves resulting in sound that propagates to your ears. But there’s a problem, the sound also radiates off the back of the diaphragm right into the motor structure that can create acoustic resonance problems, which in turn can cause problems with diaphragm movement and add distortion to the sound heard. 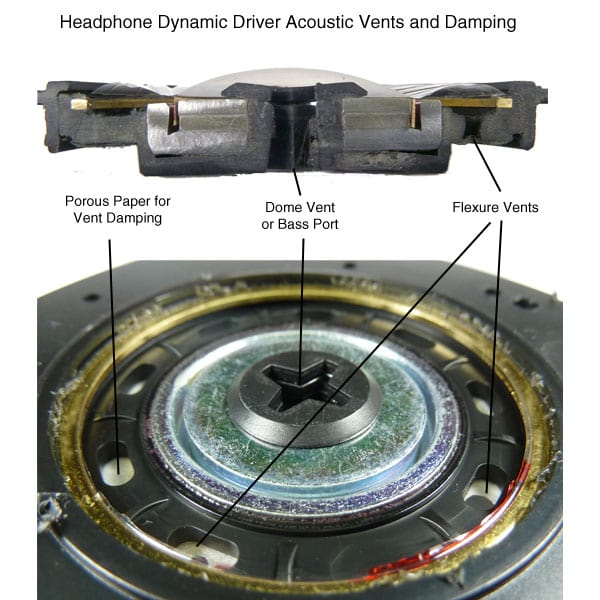 The air volume behind the dome is controlled using a central vent sometimes called a bass port. Though not shown in the image above, this vent is very often stuffed with a small piece of open cell foam to damp the vent.

The air volume behind the flexure is vented by a series of holes in a ring below the flexure. Damping is accomplished with porous paper covering the holes, and sometimes holes in the paper itself.

The exact amount of damping in each of these areas is critical to provide the appropriate resonance control in each area, and the balance of acoustic impedance between the two volumes aids in overall diaphragm performance.

Because the air volumes we’re talking about are very small, poor driver acoustic design will result in problems at relatively high frequencies. Interestingly, acoustic problems will resist the desired voice coil movement and show up in changes in impedance at problematic frequencies. 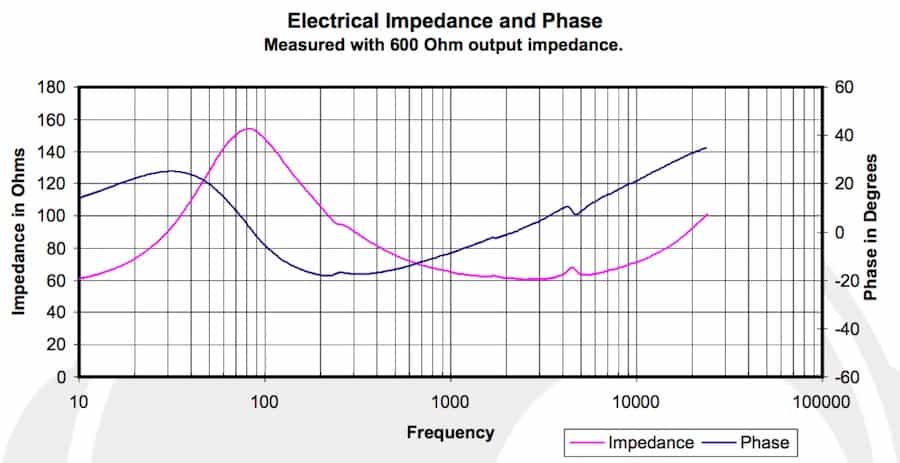 Above are two sets of headphone harmonic distortion (bottom graphs) and electrical impedance and phase response (top graphs) measurements. The set at the left show a well designed driver as indicated by very little impedance or phase change and very low distortion in the 2kHZ to 8kHz region. The set of measurements to the right show a poor driver design as indicated by erratic bumps in the impedance and phase plot, and dramatic peaks in distortion at related frequencies.

A headphone dynamic driver has a small motor that uses a permanent magnet with a ring gap and a voice coil suspended in the gap to provide linear motion back and forth when driven by an electrical audio signal. The diaphragm is attached to the voice coil and pressurizes and rarifies the air with the drive motion creating the sound you hear.

Sound comes off the back of the diaphragm as well, which is trapped in various volumes by the motor structure and causes potential problems with acoustic resonances. Headphone dynamic driver assemblies are designed with numerous small vents that often have porous paper and foam materials in them to tune and damp the acoustics of the driver’s trapped air volumes.

Tyll Hertsens is the original author 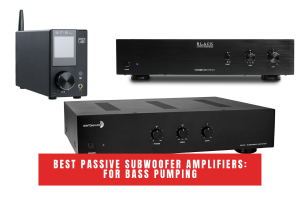 Are you looking for amplifiers to power your passive subwoofers. This article is for you 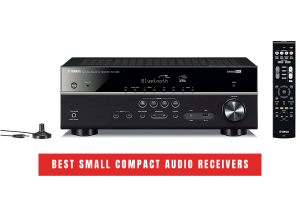 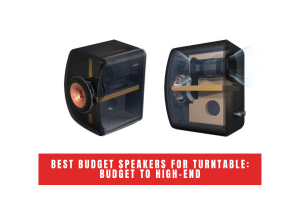